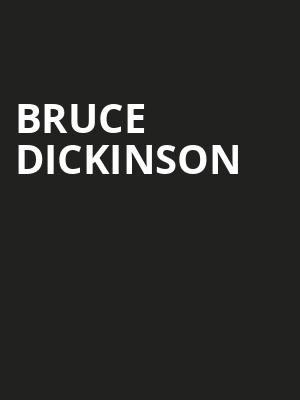 Dickinson is extremely likable, and in addition to being regaled with stories from someone you wish was your friend, you'll glean some life lessons that will last long after you close the book.

Aside from having one of the most identifiable voices in classic rock history as frontman of iconic heavy metal outfit Iron Maiden, English renaissance man Bruce Dickinson has spent parts of his extraordinary life flying planes, starting businesses, brewing beer, motivating others, acting on TV, flexing foils as an international fencer, writing books and broadcasting over the radio waves. Now he enters a new chapter as he sets out on his brand new spoken word tour!

The first half of the insightful evening sees the iconic performer take a look back at his own colorful history, delivering up behind-the-scenes, true-life tales punctuated with photographs, anecdotes from his book and his trademark anarchic story-telling style. The second half devolves into organized chaos during a Q&A session in which audience members are encouraged to ask even the most left-field of questions, putting Dickinson and his rapid fire wit to the test!

You may be required to have had a COVID vaccine in order to attend this performance or show proof of a negative test. Please contact the venue directly for more information on this.

About Kitchener Theatre: We are an independent show guide not a venue or show. We sell primary, discount and resale tickets and prices may be above or below face value.

View all times and dates

Sound good to you? Share this page on social media and let your friends know about Bruce Dickinson at Centre In The Square.