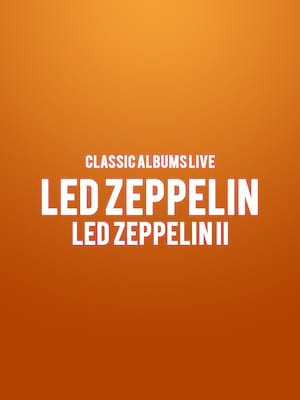 Unsurprisingly the album contained what would become the some of the band's defining live statements. "Whole Lotta Love" was born to be played live. For hours.

Based in Toronto, Classic Albums Live is a concert series aimed at keeping the spirit of rock and roll alive with glorious live recreations of seminal albums from the classic rock era. Shying away from cheap gimmicks and cheesy impersonations, the production keeps things firmly focused on the music, recreating entire records with the world's best musicians and an attention to detail to faithfully conjure every sound on the original album. Experience Led Zeppelin's behemoth breakthrough album Led Zeppelin II live!

A veritable smorgasbord of Led Zeppelin classics, Led Zeppelin II was recorded on the road whilst the iconic English rockers were on tour in the states. Fusing swords-and-sourcery-tinged folk rock of tracks like Thank You and the no-holds-barred gritty blues of anthems Whole Lotta Love and Ramble On, the 1969 masterpiece proved to be the holy grail blueprint for all the bands that followed.

Sound good to you? Share this page on social media and let your friends know about Classic Albums Live: Led Zeppelin - Led Zeppelin II at Centre In The Square.