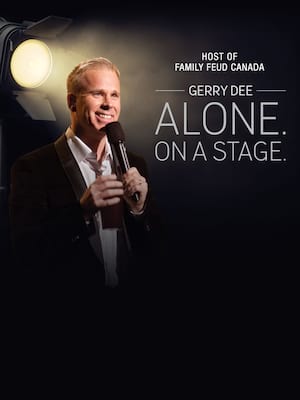 alone on a stage

Gerry brings his newest standup tour to you. The once-schoolteacher-turned-standup has conquered Canadian television with his own aptly named sitcom, Mr. Dee about a kooky schoolteacher and is the host of Family Feud Canada! Despite coming into the scene later than most comics, he calls upon his real-world experience as an ex phys-ed teacher, plus signature stories about the absurdities of life leading a private school classroom and growing up the son of Scottish-immigrant parents have endeared him to millions. He also touches upon marriage, fatherhood and the complexities of modern life.

Having won the Canadian Comedy Award for Best Comic three times, those familiar with his work will be remember Dee as a slightly stunned, overly confident sports reporter on The Score (now known as Sportsnet 360), where he interviewed, or attempted to interview the likes of NBA superstar Charles Barkley and numerous league hockey stars, often to painfully hilarious effect .

What a great show. I havent laughed that hard in some time. The warm... more

The show was disappointing & the jokes were not funny. I chose to go to... more

Read all reviews Write a review

Sound good to you? Share this page on social media and let your friends know about Gerry Dee at Centre In The Square.